The establishment of the local savings bank in Egypt in 1963 marked the beginning of the Islamic banking system. The undertaking was based on Mudaraba (profit sharing), through collecting individual savings from people and investing them through Islamic banking systems, and allocating profits as agreed upon with all parties. Similar trials took place at Hyderabad in India, in Malaysia and in Pakistan.

In addition, several Islamic governments proposed initiatives to strengthen the concept of Islamic banking. With the establishment of the Islamic Development Bank (IDB) in 1975 in Jeddah, KSA, the support for Islamic banking grew.

IDB is an international financial institution for developmental funding, foreign trade development, training and research. All Islamic countries are part of IDB, in order to support economic development and social progress in the member states, while complying with the principles of Shari’a.

Another similar institution is the International Union for Islamic Banks, established in 1977 in Makah. Its aim was to promote Islamic values, create cooperative links and coordinate Islamic banking activities.

The subsequent international initiatives were a decisive step in contributing to the integration of the Islamic banking system and turning the dream into reality. This has led to the establishment of Islamic banks in the several countries around the world. A few of the examples are: 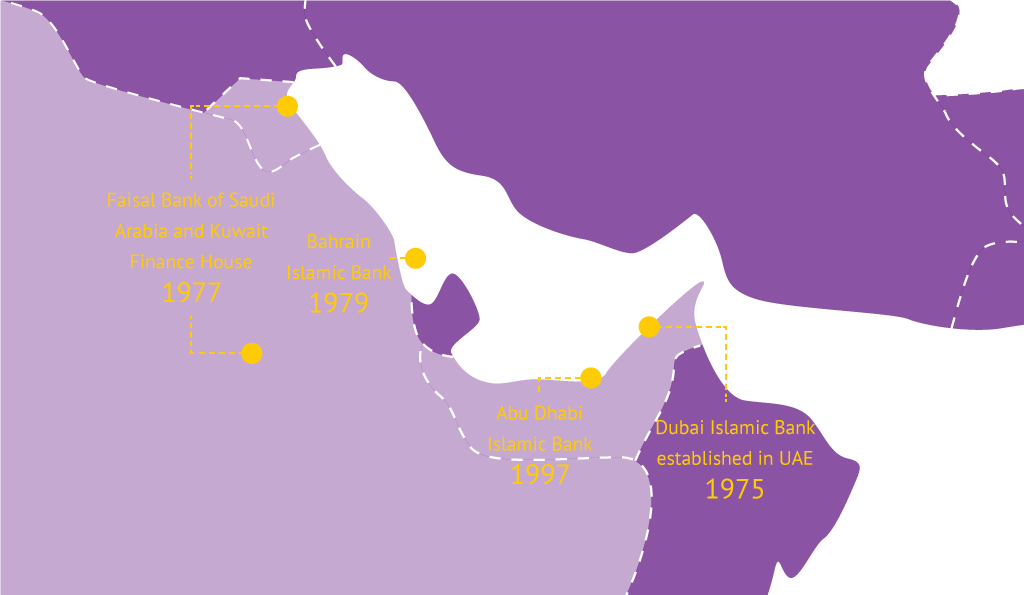 Many countries such as Pakistan and Sudan were inspired into transforming their traditional banks into fully-integrated Islamic banks.

According to the latest statistics, Islamic banks have a presence in 53 countries on five continents – 65% of which are in the Middle East, 81% in the Arabian Gulf region, 41% in Europe, 7% in the USA, and 3% in Africa.

Islamic banks are witnessing steady and continuous growth as they seek to enhance their presence in the different parts of the world, including in non-Muslim countries. Islamic banking ‘windows’ are now common in many Western countries including the UK and France – where the conventional banking system is based on interest rates (Riba).